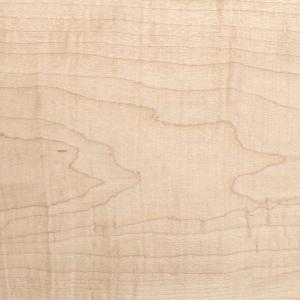 Red Maple, a domestic temperate hardwood, is commonly called soft maple, but the name often fools many woodworkers. Unlike most other hardwoods, the sapwood of hard maple lumber is most commonly used rather than its heartwood. Sapwood color ranges from nearly white, to an off-white cream color, sometimes with a reddish or golden hue. The heartwood tends to be a darker reddish brown. Birdseye maple is a figure found most commonly in hard maple, though it’s also found less frequently in other species. Hard maple can also be seen with curly or quilted grain patterns.

What are you looking for?